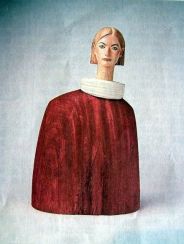 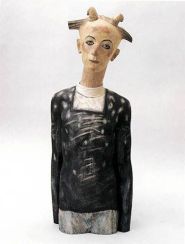 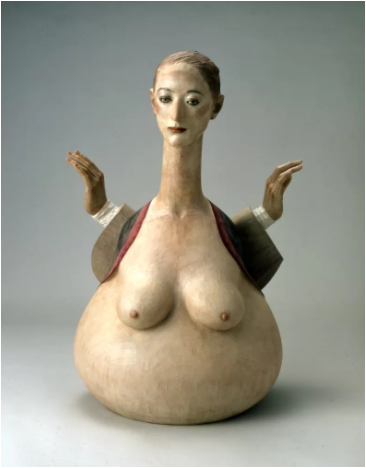 Funakoshi is considered a leading name in the field of visual arts in his country. Funakoshi’s father was also a sculptor and soon he felt the same vocation. He studied in the University of Art and Design, from 1971 to 1975, and in the University of Fine Arts and Music, from 1975 to 1977. He started carving in camphor wood, in 1980. His works, usually depicting human figures from the waist up, have a great poetical effect, and are striking and distinctive. Funakoshi works this material in a personal way and leaves visible both the grain of the wood and the marks of carving. The artist carefully utilises the grain for modelling and leaves part of the head unpainted, normally the crown.

He has exhibited his work at the Venice Biennale, the São Paulo Biennale, the Documenta IX, and the Shanghai Biennale, and his work is represented in several art museums in Japan and other countries.  (Wikipedia)

“The figure is nothing if not startling: Truncated just above the knees and suspended on four, bark-covered sticks sprouting from the body, sculptor Katsura Funakoshi’s “The Sphinx Floats in Forest” is a muscular hermaphrodite with full, female breasts and male genitalia, an elongated neck and leather-strap “ears” draped over each shoulder — a part-animal, part-human being visiting from what might be a parallel universe…”…read more on The Japan Times