Stefano Santoni review
Wikipedia, the nowadays “bible”, use these words to define the term “tag”, often used by webzines’ reviewers to describe a musical genre or assign keywords to a group or artist. Listening to the music of Rhyton, band from Brooklyn, NY, it’s easy to understand how much it’s really hard just try to classify something that it’s absolutely impossible to be locked in a single container. The band consists of three musicians who like to experiment, play with sounds, improvise, exploring greedy of emotions their subconscious; even the most revivalist of the three (Dave Shuford), is absolutely ad adventurous musician.

But let’s start from the beginning. On guitar and vocals we find Dave Shuford, also known as D.Charles Speer, member of No-Neck Blues Band and Helix. Rob Smith plays drums in a psych-rock band called Pigeons, and Jimy Seitang lent his talents on bass and keyboards to Psychic Ills and still maintains a personal musical project under the moniker of Stygian Stride. The explorative passion of the three, lead them to break the borders of their own projects, finding inside Rhyton an open space to expand and sometimes crack the walls between genres, exploring different musical roots, and creating a modernist soundscape in constant motion.

Even the choice of the album title is eloquent, Redshift is, in fact, a term that indicates an astronomy phenomenon that happens when the light emitted by a source shifts to the red end of the spectrum. This can happen because the Universe is still expanding (creating new space between source and observer, and increasing the wavelength), or because of gravitational effects of massive bodies, such as quasar and black holes. This space between source and listener (in this case) is filled by the trio fueling their own roots, which can create new sounds, that are able to go in multiple directions, sometimes bashfully, sometimes more impudently. The musicians succeed in the hard task of comparing barren alien territories with lush folk and country traditions. They are also able to develop different musical origins, as in the opening of “The Nine”, where Shuford take up his bouzouki exploring some Balkan traditions. The strong reality of roots and country music against cosmic and psychedelic suggestions: a dualism illustrated perfectly in the beautiful cover art designed by illustrator and painter Arik Roper (Sleep, High On Fire, Howlin Rain, Earth), showing an american indian proudly standing, and watching fearless inside a sort of extraterrestrial machine. There is an area inside the record, where we can find a challenge between earth and space, between traditions associated with popular culture and alien influences. It happens for example in the title track “Redshift”, where the country classic rock of the first half of the song is gradually replaced by a synthetic shapeshifters that seems to catch us with a dissonant tractor beam leading us into ‘other’ space.

Construction and deconstruction, two sides of the same coin, two parts that seem very distant to each other, but in fact they are simply connected on a different level of reality. Get lost in the forest and in the cosmos within the same trip: in the lush world of psychedelic fingerpicking of “Concentric Village” and inside the electric ride of “End Of Ambivalence” which reminds me some past Quicksilver Messenger Service journeys. They are able to surprise swimming among the meteorites of a science fiction movie, going along with only bass notes to mark the passage of time, as in the final “The Variety Playhouse”.

“D.D. Damage” with his complex and dissonant way linked to folk tradition, reminds what was done in the post-rock era by John Fahey with Cul De Sac in a treasure chest filled with absolute wonders called “The Epyphany of Glenn Jones”. The title track is not the only song where Shuford’s voice can be heard: there is also a cover of the Joe Walsh song “Turn To Stone”, featured originally in Walsh’s first solo album. The musicians are able to play with absolute mastery dilating the original version, destroying it with the sacred fire of improvisation before re-creating it from the beginning through a sort of nuclear fusion. The surprise elements, the mistery’s fascination, are always just round the corner, ready to grab us as soon as we let down our guard listening to the players’ skill and passion.

Redshift was recorded by Jason Meagher at Black Dirt Studios in NYC (Steve Gunn, Michael Chapman, Jack Rose). Shuford and his fellow adventurers, releasing their fifth album (third for Thrill Jockey), prove they are true masters in revival art, which is never derivative, but in continue expansion and mutation. Rhyton firmly ride a wild beast, complying with their more atavistic instincts and softening the most cruel instincts; indifferent, like the american indian on the cover, to the blood flowing all around. Listen to this record opening your heart and mind, play it loud wearing headphones, you will feel torment and ecstasy at the same time.

Rhyton
Rhyton is an American experimental psychedelic rock band from Brooklyn, New York.
Rhyton was formed as an improvisational outfit by Dave Shuford, Jimy Seitang, and Spencer Herbst; Shuford had been a member of No Neck Blues Band and Seitang had played with Psychic Ills.  The group recorded its debut album in a span of only three days, later issuing it as a self-titled effort on the label Thrill Jockey.  The band has since released two further full-lengths on Thrill Jockey as well as two limited-edition LPs on other labels. (wikipedia) 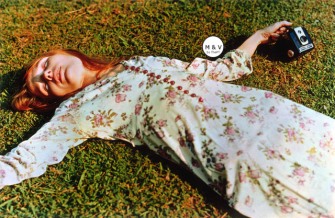 24 Grafton Street
London W1S 4EZ
Tel: +44.203.538.3165
Email: eggleston@davidzwirner.com
All other inquiries may be directed to info@egglestontrust.com