Take Time, from The Lemon of Pink studio album, released October 7, 2003, label: Tomlab.
The Books were an American duo, formed in New York City in 1999, consisting of guitarist and vocalist Nick Zammuto and cellist Paul de Jong. Their releases typically incorporated samples of obscure sounds and speech. They released three critically acclaimed albums on the German label Tomlab, and released their fourth studio album, The Way Out, on Temporary Residence Limited in July 2010.
Zammuto and de Jong first met in New York City in 1999 as they shared the same apartment building. De Jong invited Zammuto to dinner at his apartment, where he played him some of his collection of audio and video samples, including a Shooby Taylor record. Zammuto said of their meeting that “we both kind of knew at that moment that we listened (to music) in interesting ways and had similar approaches to music.” Soon after, they began playing what they considered to be pop music, in comparison to their own works, under the name The Books. In 2000, The Books started work on what would become their début album Thought for Food. Zammuto and de Jong moved locations constantly during this time, recording in New York, Los Angeles, Boston, and finally in the basement of a hostel in North Carolina where Zammuto worked for a while after hiking the Appalachian Trail. Thought for Food was released on October 22, 2002. Praised by critics for its distinctive sound, it featured extensive sampling from obscure sources coupled with mostly acoustic instrumentation.
Shortly after the release of Thought for Food, the band relocated to North Adams, Massachusetts, near where Zammuto had graduated from Williams College in 1999, studying chemistry and visual arts. Zammuto and de Jong began the recording of The Lemon of Pink around this time. Anne Doerner, a guest vocalist on the album, said the process was much more arduous than the recording of Thought for Food, with Zammuto working on the album for five straight months. The Lemon of Pink was released to critical acclaim on October 7, 2003. It is similar in style to Thought for Food, but oriented more around vocals performed mostly by Anne Doerner… more on wikipedia 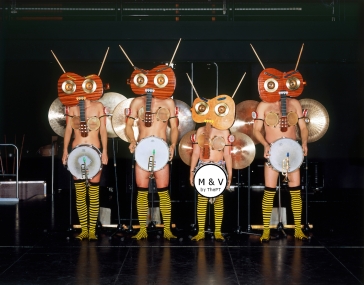 Olaf Breuning is a Swiss-born artist who lives in New York City.
Works
Home 1/Home 2 (2004/7)–30 minute video starring Brian Kerstetter. Home 1 is presented as a double-projection, where the main character can no longer distinguish the difference between reality and fiction. He wanders around a hotel room telling stories about himself and other people to the camera. As he tells the stories, they are simultaneously seen on the opposite screen. In Home 2 Brian Kerstetter plays an ignorant tourist staggering around the world from Switzerland to Africa and Japan to Papua New Guinea, crashing his western mentality upon the exotic places he goes.

Ugly Yelp (2000), Apes (2001), King (2001), Hello Darkness (2002)–With these installations, Breuning creates theatrical atmospheres using sound, video and light. These installations have been shown in many museums and are owned by collections internationally.
Easter Bunnies (2004)–A photograph created on Easter Island, transforming the Moais sculptures into Easter bunnies by setting up rabbit ears on C-stands in the extreme foreground.
Sibylle (1998)– Photograph of a female model lying on a table, whose body has been affected by cultural references to Matthew Barney, Cindy Sherman, Pablo Picasso, and others, resulting a creepily mutilated creature.
Smoke Bombs (2008)–Exemplifies Breuning’s photographic technique of leaving the mess of production within frame, allowing the viewer to see behind the scenes of the production.
more info on wikipedia