From the album Tileyard Improvisations Vol. 1
Max Cooper
RA top 20 live act of 2013 and 2012, top 100 DJ 2011
“Incredibly intense” – Pitchfork
“Insanely good” – The FADER
“Impossibly gorgeous” – FACT
“Ace” – theQuietus
“Wants you to dance and cry simultaneously, and will probably succeed in doing so” – DUMMY
“A religious experience .. a master at blending blissed-out, lightweight textures with moments of heavy darkness” – Earmilk
“Recalls Philip Glass, Aphex Twin’s most serene moments and even Henryk Gorecki’s Symphony No. 3” – Resident Advisor
“A quiet elegance that’s unique to the genre” – XLR8R
“Some of the more ambitious and exploratory music crafted within the last few years” – The Music Ninja
“One of today’s most innovative electronic musicians” – DJZ
Kathrin deBoer
A brilliant two days spent at the Tileyard studios with the incredible Quentin Collins and  Max Cooper.  We went into the studio with no plan, Quentin and i had free reign to improvise and throw down ideas.   Speaking for myself,  it was the perfect environment to explore our instruments and enjoy bouncing off  each others ideas. In the words of my mentor Freddie Wilson, if it ain’t fun you ain’t doing it right.. and i have to say- this was as fun as it gets.
A huge thanks to Max and Quentin and Gearbox for running with this, it was a leap of faith and a great experiment..
Anyone else game??
Let me know..The lyrics are taken from a poem i wrote- inspired by a few months out in LA…
Caught in the city
of lost souls
With a mission inked to each arm
holding onto the cliffs
with no hint of fatalism,
no hint..
Do or die, hear them cry
do or die, hear them cryLife’s locomotion runs over them
over them
Life’s locomotion runs over them
over them
Life’s locomotion runs over them
over them
Life’s locomotion runs over them
over themDo or die, hear them cry

Quentin Collins
b. c. 1978, England. Raised in Richmond, Surrey, Collins was interested in music from an early age and studied the trumpet. Later, he took a post-graduate course at London’s Guildhall School of Music. A strikingly gifted trumpeter, Collins has gained an enthusiastic jazz audience as well as considerable critical acclaim for his dazzling post-bop playing. He became known to a wide audience through a long spell touring with soul singer Omar. Among jazz artists with whom he has performed and sometimes recorded are Renato D’Aeillo, Bruno D’Ambra, Mike Carr, Tim Garland, Michael Garrick, Ray Gelato, Basil Hodge, Dylan Howe, Tony Kofi, Jim Mullen, the Spitz Jazz Collective, John Surman, Jean Toussaint, Stan Tracey and Norma Winstone. Meanwhile, his studio work has found him in rather different musical company through sessions with Basement Jaxx, Jocelyn Brown, 4 Hero, Lulu and US3.

Although Collins draws some of his jazz repertoire from music played in earlier years by artists such as Thelonious Monk and John Coltrane, his work is decidedly contemporary, original and innovative. For his 2007 debut album, Collins allied himself with vibraphonist Jim Hart, bass player Michael Janisch and drummer Alyn Cosker as well as guest saxophonist Kofi. In 2007/8, Collins toured the UK in duo with Hart who also played in his working quartet, as did drummer James Madren. By the mid-00s, Collins was a leading figure on the UK jazz scene.”. ( source allmusic.com ) 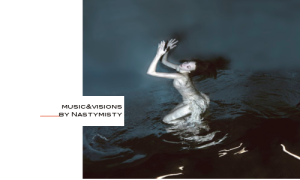 Born and raised in the  rhineland near Cologne the german photographer based in the Netherlands has been completely devoted to photography only since 2011 as a fulltime artist. Her  portfolio is mainly composed of underwater taken pictures, conserving the elegance of classical photography and adding, at the same time, that surprising, yet mysterious, surrealistic element. The influence of passion for

performing arts often is reflected in elements of dance. Gabriele Viertel keeps simplicity in composition with a focus on the central subject. The works of art of female portraits are ones of striking beauty, managing to transmit intense emotions to their viewer.

Gabriele’s work  has been published by internationally magazines inter alia Vogue Italia and has been exhibited in the USA , Spain and The Netherlands.

The natural element of life – water – also as symbol of the human emotional world, is the scenario for self-reflection, doubts ,  feelings and development.

Inspired by femininity and its gracefulness  the images are always  highly expressive, ethereal and aesthetically, with focus at the subject and  tension between theme and visual perception.

As a lover of performing arts, especially dance, Gabriele stages her work meticulously and choreographically.