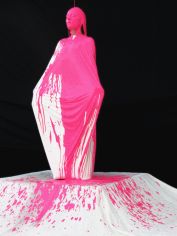 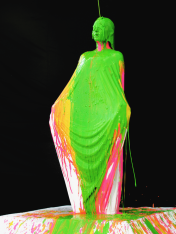 Millie Brown
b. 1986 in Bath, United Kingdom.
Currently living and working in Los Angeles.
British performance artist Millie Brown began her career at the age of seventeen. Brown is a founding member of London’s !WOWOW! collective, which has produced such luminary talents as fashion designer Gareth Pugh and artist Matthew Stone. Hailed as one of the new YBAs (Young British Artists), Brown is a performance artist who explores the synergy and separation of mind, body, and spirit.
Most recognized for performance as a non-traditional method of painting, Brown uses her body as a tool to create artifacts that are remnants of her process. Reminiscent of abstract expressionist studies, Brown produces aesthetically whimsical paintings with a deep underlining rawness of human emotion. Viewing the body as a vessel for spiritual practice, Brown pushes her physical and mental boundaries to reach a state of enlightenment from which creative expression and healing derives.
She has collaborated with innovative talents such as Nick Knight, Ruth Hogben, and Lady Gaga. Notably, her performance film for Gaga’s Monsterball Tour was exhibited at the SHOWstudio gallery and showcased worldwide throughout the tour. Brown was included Emmy award winning documentary, Lady Gaga’s “Monster Ball Tour at Madison Square Garden”.