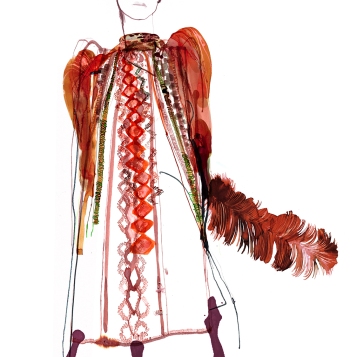 Lucid, dreamy and vibrant illustrations reflect the enticing inner world of highly regarded artist, Daniel EgnÃ©us. With no formal education except for life itself, Daniel sees everyday life and art as one inseparable whole. His work is an expression of his colorful and rich life in Milano, Rome and Athens, filled with friends and not least his daydreaming, which finds its way into his work, inspiring us with it’s beauty and depth.
Born in 1972 in Sweden, Daniel has spent 20 years in Prague, London, Berlin, Bologna, Rome, Milano and has now made Athens, Greece his base. A prolific artist, he has had successful collaborations with clients such as Haagen-Dasz (worldwide campaign 2008), BMW (Awarded Best Art Directed campaign in Germany 2008), Pepsi Cola Espagna (limited edition cans and bottle-design 2008), Playboy, O2 UK, Marie Claire, Time Magazine, Penguin Books, Philip Morris, Die Welt, Suddeutsche Zeitung, Random House, Drambuie Whiskey for which he gained an award in 2004 and Pori Jazz Festival for which he was voted best illustrator in March 2005 by the Assosciation of Illustrators in the UK. A regular collaborator with the National Theater in Greece for whom he produced illustrated theater programs for A Man for All Seasons, Mefisto and for Luigi Pirandello as well as the posters and the animated spots for Greek TV for Athens Festival.
In December of 2009 he was sponsored by Audi at Art Basel Miami where they presented an oversized book featuring his illustrations and he spent five days onsite doing live drawing.
He has published many books including The Voyage of Argo for Folio Society in London 2014, The Little Red Riding Hood for Harper Collins in New York 2011 and The Hot Dog-Cook Book in France for which he won the Prix Gourmand 2008 for “Best Illustrated Cookbook in France” and he has illustrated several books of poems by Aleksander Puskjin. In 2004 the Italian publishing house Coniglio Editore published his first collection of autobiographical comics.
In 2005 Sky Channel dedicated a 15 minute documentary about his work entitled “From Sweden with Love”. He is a member of the London-based group 4Wall – twelve contemporary artists organizing shows all over London.
He is represented by the American Art Gallery Decorazon and at PrintSin where they sell his Limited Edition Art Prints.
Daniel is the inventor of the style “Quotidiano-Straordinario.”
He has no formal education.