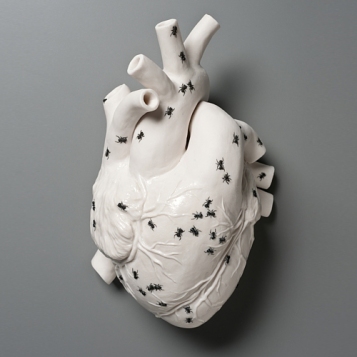 We do not want merely to see beauty, though, God knows, even that is bounty enough.  We want something else which can hardly be put into words–to be united with the beauty we see, to pass into it, to receive it into ourselves, to bathe in it, to become part of it. – C.S. Lewis.

“In my work this romantic ideal of union with the natural world conflicts with our contemporary impact on the environment.  These pieces are in part responses to environmental stressors including climate change, toxic pollution, and gm crops.  They also borrow from myth, art history, figures of speech and other cultural touchstones.  In some pieces aspects of the human figure stand-in for ourselves and act out sometimes harrowing, sometimes humorous transformations which illustrate our current relationship with the natural world.  In others, animals take on anthropomorphic qualities when they are given safety equipment to attempt to protect them from man-made environmental threats.  In each case the union between man and nature is shown to be one of friction and discomfort with the disturbing implication that we too are vulnerable to being victimized by our destructive practices.

I hand sculpt each piece out of porcelain, often building a solid form and then hollowing it out.  Smaller forms are built petal by petal, branch by branch and allow me the chance to get immersed in close study of the structure of a blossom or a bee.  I chose porcelain for its luminous and ghostly qualities as well as its strength and ability to show fine texture.  It highlights both the impermanence and fragility of natural forms in a dying ecosystem, while paradoxically, being a material that can last for thousands of years and is historically associated with high status and value.  I see each piece as a captured and preserved specimen, a painstaking record of endangered natural forms and a commentary on our own culpability.”.