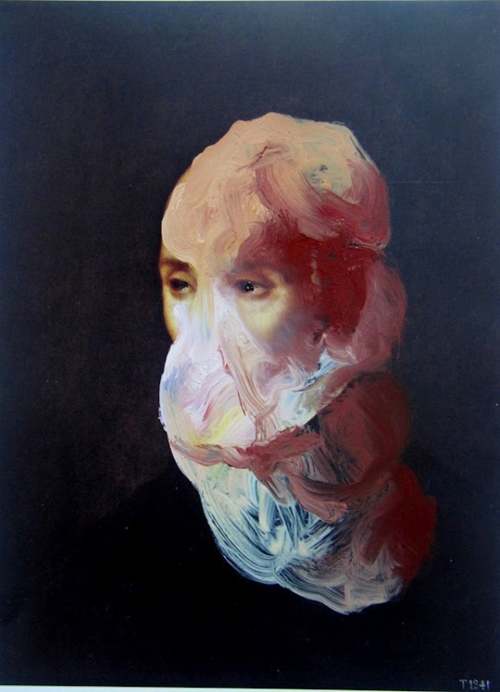 In these last years Joseba Eskubi (Bibao 1967) has worked a gestural painting, combining techniques and processes that try to accentuate the material qualities of the image. He is interested in organic forms in decomposition, soft and amorphous that accentuate the tactile sense of vision.

His work usually presents a kind of stage where there is a single figure, silhouetted against the background., trying to maintain a certain ambiguity that allows the suggestion and evocation. The pictorial gesture builds a credible figure, but at the same time it is decoded as an abstract, and purely material. The idea is that each image has a temperature, a character like a portrait of an unknown thing until you create it. 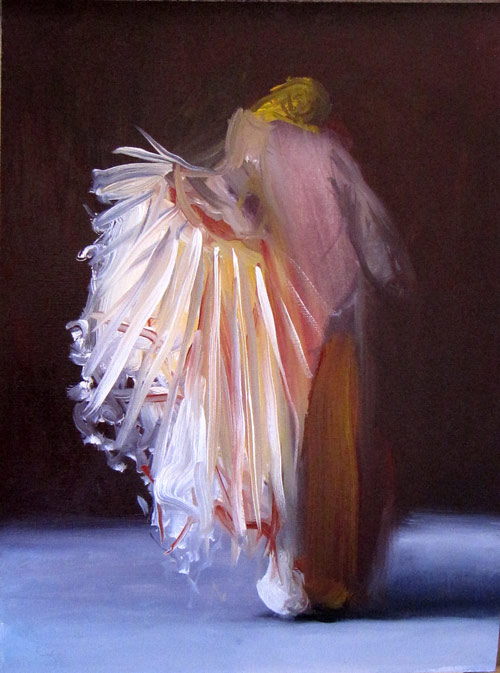 Joseba Eskubi´s process is quite intuitive and fast, acting directly on the canvas. He works with a serial device that causes an obsessive effect, a necessity absurd and indomitable. This repetitive structure, projects itself over time like a big body beating and breathing, the strange body of painting.

In some other works he uses  classical references transforming and manipulating them until they lose their initial context and produce a new meaning. It´s a kind of collage where where he tries to simulate an internal transformatio,n of process of painting.  Each element can be alterated as something alive and open; continuous metamorphosis where there is a superposition of old and new planes, a geography made by style interferences and collisions.

POETIC OF THE ANNIHILATION

Joseba Eskubi works in the building of a stage space, or better, of the different and separated stage spaces that are each of his paintings. Separated and demarcated spaces, in which the painting mass is spread out, turned, heaped up, crushed and flattened till it becomes and atmosphere in earth, place, in before and behind and in figure-mass. In this work there is not an image that can be separated from that organic mass of painting which turns a painting into a body.

In the succession of places in Joseba’s painting, there were once buildings. Buildings or building-structures, born from the entwining or interweaving of lines and of the delimitation of colour layers, both rigid and organic. Buildings in the middle of empty spaces, in which the wind did not blow and from which the buildings seemed to look at us. Besides, on a certain day the earth line remained fixed for good. A line of an uncertain horizon, separating vertical and horizontal. Heaven and earth, which are not but his workshop’s womb as displayed in heaven and on earth. There had been also, in the middle of many paintings, spots, stains or flecks like still and motionless stones in the middle of a dream.

Now the painting becomes thicker and more solid looking like something seeming tight blood bags, entrails, stumps, excrements. Images addressing our senses. Air, floor, ground surrounding them. Tactile, smelling and tasting embodiments, referring in their turn to the future absence of any possibility of feeling. Dead flesh and food, like in the history of painting. It is the mis-en-scène, the stage, of two antagonistic actors, fully revealed when they blend into only one vision. A theatre of annihilation of contraries that is the baroque stage space, of Baroque as such. High density zones in the scenery of a dissecting table. A table on
which the images of another annihilation have been displayed: that of the soft manipulation of the painting melted with the violence of fear. Indefinable and living, vital, fear going through Eskubi’s work. Foundational fear. Fear coming from ever, but each time with a new identity.

A wisely controlled modulation of colour degrading as well as of the projected shadows. A knowledge about the organization of volumes and bodies, all the more necessary in order to paint a three-dimensional space. “Craft, workmanship”. All the necessary elements so that the question becomes a question of stage scenery. It offers the painting to our eyes in a place that allows the painting to be given a name. To call it entrails, horizon, body, enigma. To call it without feeling its substance, its density, its texture.
A suggestion of blood colours, of capillary pinkish and purplish morbid flesh shades. Here and there, rare interferences of lively colours, or of absence of colour, displease, creak. Some other times, vague ochre coloured glimpses suggest a body’s decomposition spreading in the air. Colour and its evocative power in Joseba Eskubi’s painting completes the view suggested by the objects’ outlines. It shapes in our brains the representation of what has been seen. By means of colour, Eskubi let us absorb some sort of information that, by evocation, brings us, beyond the visible contents, into the field of the vaguely suggested.
Against a hypothetical figure emptiness, below the spread out colour masses, we discover in other works, photographs of partially buried works by other painters of centuries ago. Figures, images of covered or hidden figures, crushed under avalanches of chromatic masses. As if painting oil and stretcher frame were not enough to take and fill someone’s place in the History of Painting, the same one that contains Halls and Mondrian. As if it were infecting the extremity of The Painting’s body that is a post card with fresh painting. Matter, which in turn is what makes a body out of image and like a body open to being infected. In other works, rare ones, in which that figure emptiness occurs effectively, this emptiness finds on its support the form of a mesentery of rubble, lines and frayed, superimposed colour levels. As if the wind had blown, this time too strongly, and had left us in front of the remainders of a hurled down, collapsed silo, in which some grieving person was felt missing.

Finally, we can ask our selves, when, in which moment, took place the represented event. Because the stage in front of us seems to be uninhabited and send us towards our own anxiety. If what we are looking at is the debris, it is because we have necessarily arrived after the happening of what happened, i.e. in a future. In a skinned, flayed, fleshless bony future (deprived of its flesh). Once again, some sort of relationship with privileged baroque places, beyond vanities, places that were ruins and also the library. Places that set in present time hold each one likewise their part of memory and their part of future melted and cast together (fundidos) as well as mixed up (confundidos). I.e. the dream of this image as given to us, is given as a premonitory dream, and being some sort of foreboding, the fundamental fear of which I have talked before takes the rudder helm fast in its hands again, till it is evacuated, thinned down and spread out over the painted surface. Once and again.