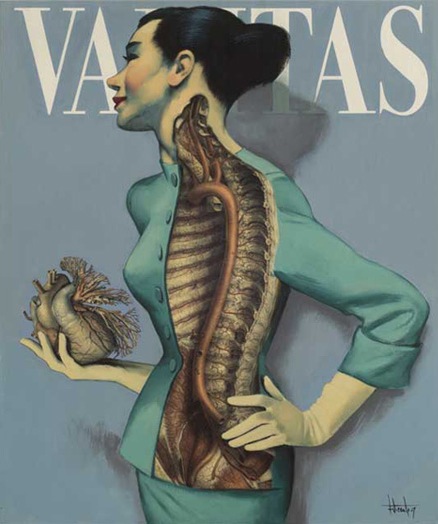 Fernando Vicente Sánchez (Madrid, 1963) is a spanish cartoonist, illustrator and painter.
His early work as an illustrator was published in the early eighties in the Madriz magazine, where he would work on an ongoing basis both in the field of illustration as a cartoonist.
Since then he has worked for magazines such as La Luna de Madrid, Europa Viva, Ronda, Iberia, Lapiz, Rock de Lux, Vogue, Playboy, El País Semanal, Gentleman, Letras Libres, Cosmopolitan, El Malpensante, Interviú or DT.
From 1999 to present Babelia published regularly in the cultural supplement of El País. Thanks to this work has won three Awards of Excellence from the Society for News Design.

Besides his work for newspapers and magazines, has also done book covers and discs, as well as illustrations of the following books: Peter Pan, Momo, The Strange Case of Dr. Jekyll and Mr. Hyde, The Valley of Fear, and The small hoplite. In 1984 he first exhibited his works in Gallery Moriarty and Comic Festival de León. Since then he has participated in many exhibitions, both collective and individual.
His work is collected in the volumes:
• The pin-ups of Fernando Vicente (2004, Dibbuks),
• Literatura Ilustrada (2007, Ediciones Sins Entido and Diputación de Sevilla),
• Portraits (2009, Blur Ediciones)
• Portadas (2010, Brandstudio Press).
• Universos (2011, Casal solleric).

As for his work as a painter, highlight the Atlas series, Anatomy, Vanitas and Venus

Fernando Vicente:
“The painting is always present in the study, begin with an idea and developed when hang up the work, which in some cases, the time may be 2 or 3 years. My exhibitions are thematic and they reflect all my obsessions. All paintings are connected. When I paint I like to do on printed materials, is a way to unite my passion for topics such as anatomy, mechanics and my hobby for collecting posters, maps, atlas geographic and geographical anatomy with my work. I’ve been to have this material in the flea market of Madrid (called “Rastro”), in shops and antique fairs and even my first exhibition were paintings on advertising posters, which are on the bus shelters and posters that advertise concerts, many of these posters, some them are torn off the wall of the street, they spend some time in the study before even thinking about using them as support for a painting. Once I bought a collection of posters from mechanical and they accompanied me a
few years before becoming tables, is my “Anatomies” series, I try to turn the posters to find the shape of the human figure, creating a kind of robotic, cyborgs or forms, I am always interested by cyberpunk culture and the human body. 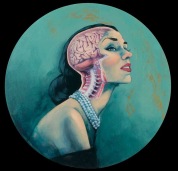 “Vanitas” series collect my last exhibition and is the material that I’m still working, the human body without subterfuge, outside and inside, its fragility, is the mirror to look in that we realize how fragile we are, and what we think, we all have the same viscera, arteries and muscles. Inside the human body is a tremendous beauty, I am captured by it, it took years for selection of medical books and anatomical atlas, and this series attempts to reflect its beauty, and fragile. Place the bare interior, looking for the human soul. If someone gives you his heart is really what gives you that and nothing else, the total delivery. If it shows you, is really showing how it is. For a long time inside the human body has been postponed for the exclusive use of medicine and science, it is time to claim it for our contemplation. 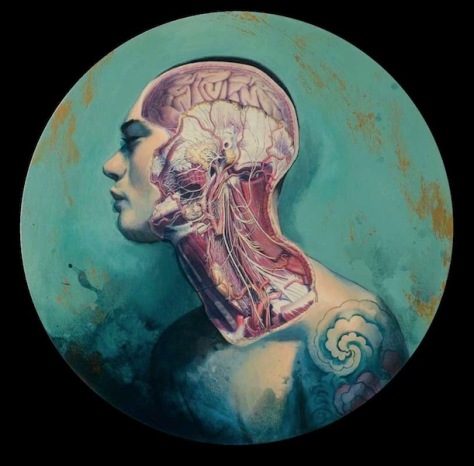 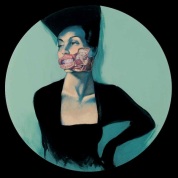 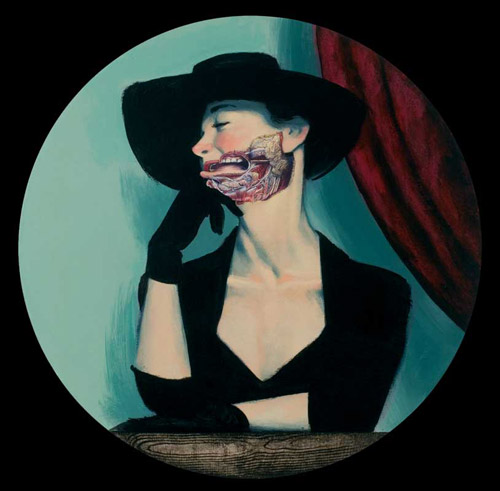 The Vanitas is a recurring theme in the history of painting (vanitas vanitatis, omnia vanitas) intended to convey the futility of worldly pleasures compared to the certainty of death, usually represented by a skull surrounded by wealth, reminds us that the skeleton our time here is finite and therefore it is useless to accumulate wealth. Vanitas I try to represent this new vanity of fashion and glamour, so many main character of the paintings are like mock covers of fashion magazines, Vanity Fair et omnia vanitas.