The life of stencil artists is one of contradiction. The act of spray-painting is immediate and chaotic; yet the stencil is created painstakingly & with absolute precision. The wild art of the can is tamed, controlled & brought to solid form by the template, surgically hand-carved. The details & care that goes into creating the stencil is artisanal, committed and focused. A stencil artist seeks not necessarily to create but to recreate. To relocate. From the impermanent recesses of the creative mind, to the authority & permanence of the stencil.

Studying fine art at university, I was fascinated by miniature design, Japanese animation & propaganda posters. It was while living in East London during the early 2000s that I became intoxicated by a graffiti movement that was coming of age. One couldn’t help but notice the colour & imagery that soaked the otherwise drab grey walls of Dalston & Shoreditch. For me & my brother, trying to find the latest D-face, Flying Fortress, Obey or London Police to name a few, was like a city-wide treasure hunt. This city was Banksy’s Hollywood, his reputation blew up in London; and so too did the grafters & the artists of the shadows as they stepped into the light of the gallery. But this wasn’t just a time for the commercialization of graffiti. It was the playground of the one-off creative & the political activist; the walls were speaking, screaming & I was all ears. DS Art was the love-child of this movement.

‘David’s work takes the art of stencil-work to levels of exceptional detail. Multiple layers create imagery beyond the monochromatic designs that adorn the walls of our streets; instead we are presented with depth, colour & detail that is complex, tactile & mentally engaging. Themes of violence & fragility are underscored by the playful & outright stupid – all dressed in the robes of rich colour & form.’ Andres Olow Clase, Orion Contemporary ( source .dsart.co.uk) 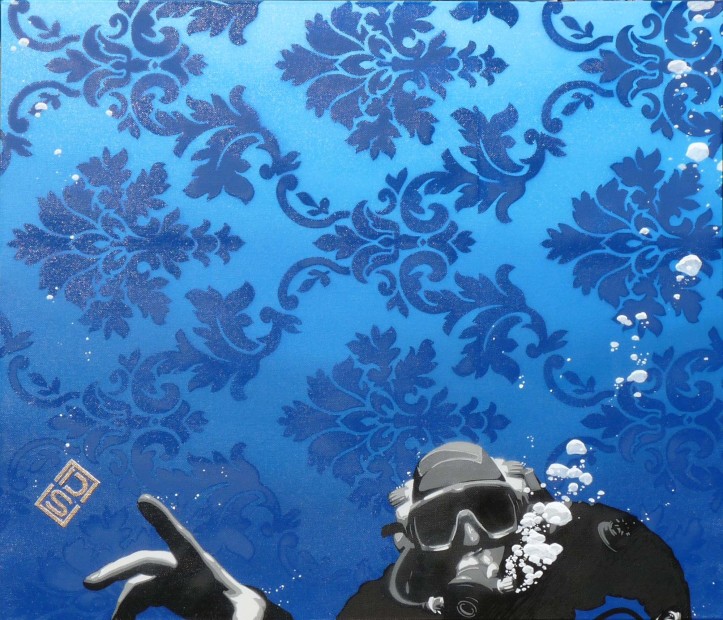