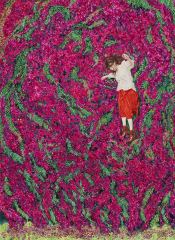 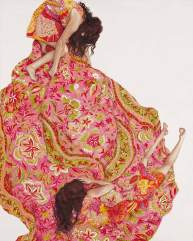 Monica Rohan’s artwork can be found at Jan Murphy Gallery in Brisbane and Sophie Gannon Gallery in Melbourne.

“Floating transcendence and anchored realism share equal magnitude in Monica Rohan’s paintings. Inspired by a rural-idyll of a childhood in South East Queensland and the internal longing of the 19th century novel, Rohan reflects on the genre of autobiography through a mysterious form of self portraiture. Allowing her imagination free rein, Rohan represents the figure in a variety of emotional roles and physical states. Using space as a striking pictorial device, her female subject is positioned in adventurous settings, endlessly floating or falling, climbing or reclining, hunting or hiding.”…read more

MONICA ROHAN SELECTED AS A FINALIST IN THE
2017 SULMAN PRIZE