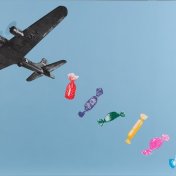 Webb’s work has become on online sensation with hundreds of thousands of people sharing his images on the internet. As well as going viral in the virtual world, Joe has exhibited and sold work internationally.  His original collages and prints can be found in the Saatchi Gallery and in the collections of Coldplay, Eric Cantona, The Madden Brothers and Janelle Monae. He supports, with artwork donations, charities such as Peace One Day and the The Big Issue.

Joe lives and works in the UK.