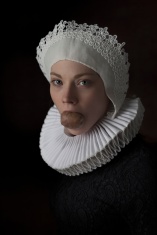 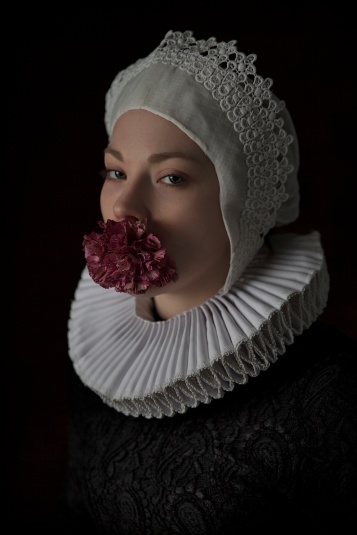 In the Netherlands, the Dutch old Masters and their paintings play an important role in our cultural history. Names like Van Gogh, Rembrandt and Mondriaan are ingrained in our collective minds at a very young age. They are part of our cultural identity and they inspired me to create photographs with the feel of an old painting as a way of honoring their contribution to our culture.
In the photo series ‘Silent Voices’ I symbolically draw attention to gender inequality around the world.
Nowadays, feminism is trivialized even by women. Especially by women. But gender inequality is still one of the most systemic inequalities in the world. That fact is independent of culture, race or religion. In fact in every culture, race or religion to date, it has been present.
Whether it is the gender pay gap, inequality in job performance reviews, domestic violence, honor killings or the stoning of rape victims, there is still a lot of work to be done. Everywhere
Or in the words of former US president Jimmy Carter :
“There is a pervasive denial of equal rights to women, more than half of all human beings, and this discrimination results in tangible harm to all of us. It is the worst and most unaddressed human rights violation on Earth.”
There are still a lot of silent voices. My wish is that they will all be heard.

| for her lastest work on Silent Voices click here |

After finishing her MBA, Marinka‘s studies in Buddhist Psychology guided her philosophical journey and the Photo Academy in Amsterdam stimulated her to channel her concepts and feelings into images.
Gender equality is a main theme running through Marinka’s work. She feels strongly about the importance of raising this subject and she just returned from Iran where she worked on two projects concerning the position of women.
Marinka’s photography revolves around people and is a constant reflection of her passion and fascination for human nature and the way we live our lives. Especially topics concerning injustice and inequality are a driving force behind her work.
Her utmost wish for her photography is the chance to make a difference. By creating awareness and touching people’s feelings, since she believes that an image is indeed stronger than a 1000 words.

Ultimately for me it’s about connecting with people, I remember each and every moment that they, for a brief moment, let me into their lives.

I thank them all.